What’s that old adage about making something more attractive by telling someone they can’t have it? Well, if ever there was a perfect example of that thinking, it’s two-strokes. Deemed redundant by an army of naysayers—including the motorcycle racing fraternity themselves—they were meant to go the way of the dinosaurs. But no… not just yet. For anyone into classic track racing, the temptation of entering a competition with something as light and powerful as one of the bikes you see here is just too much to handle.

And so those old, oily, smoke-blowing classics that were meant to have been melted down and turned into Toyota Hybrids right about now are still out and about. Yes, there’s some classic dirt bikes that surely need to be included on a list, but for this month we’ll focus entirely on their bitumen brothers. So in no particular order, here’s our list of the bestest five blue smokers ever. 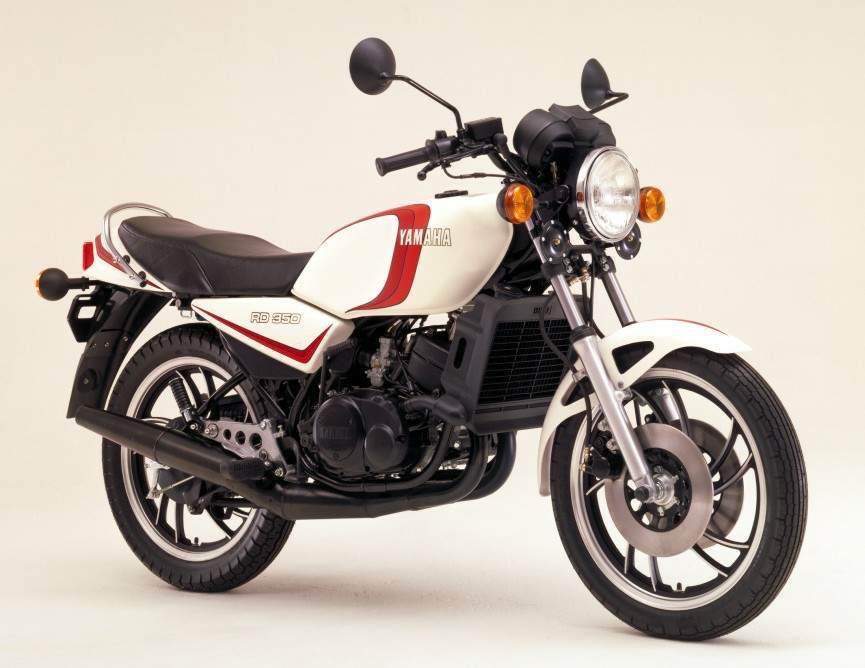 Wet dreams are made of this. Image via Yamaha MC.

For a generation of wanna-be junior racers born in the late ’60s and early ’70s, the Yamaha RD350 constituted a dream bike that would still raise blood pressures and tents in pants to this very day (especially in the UK). See, back then in 1980 or thereabouts, fast motorcycles weren’t as plentiful or as cheap as they were today.

Depending on your financial circumstances and just how much money your parents made, a request for a motorcycle for Christmas could result in any number of flat-out rejections, lame-ass mopeds, buzzy scooters, and many other “I could probably run faster than this” two-wheeled options. But if you managed to somehow land yourself an RD350, you’d be instantly rocketed to the top of the list for local cool kids in your area. It was that good. And that fast. 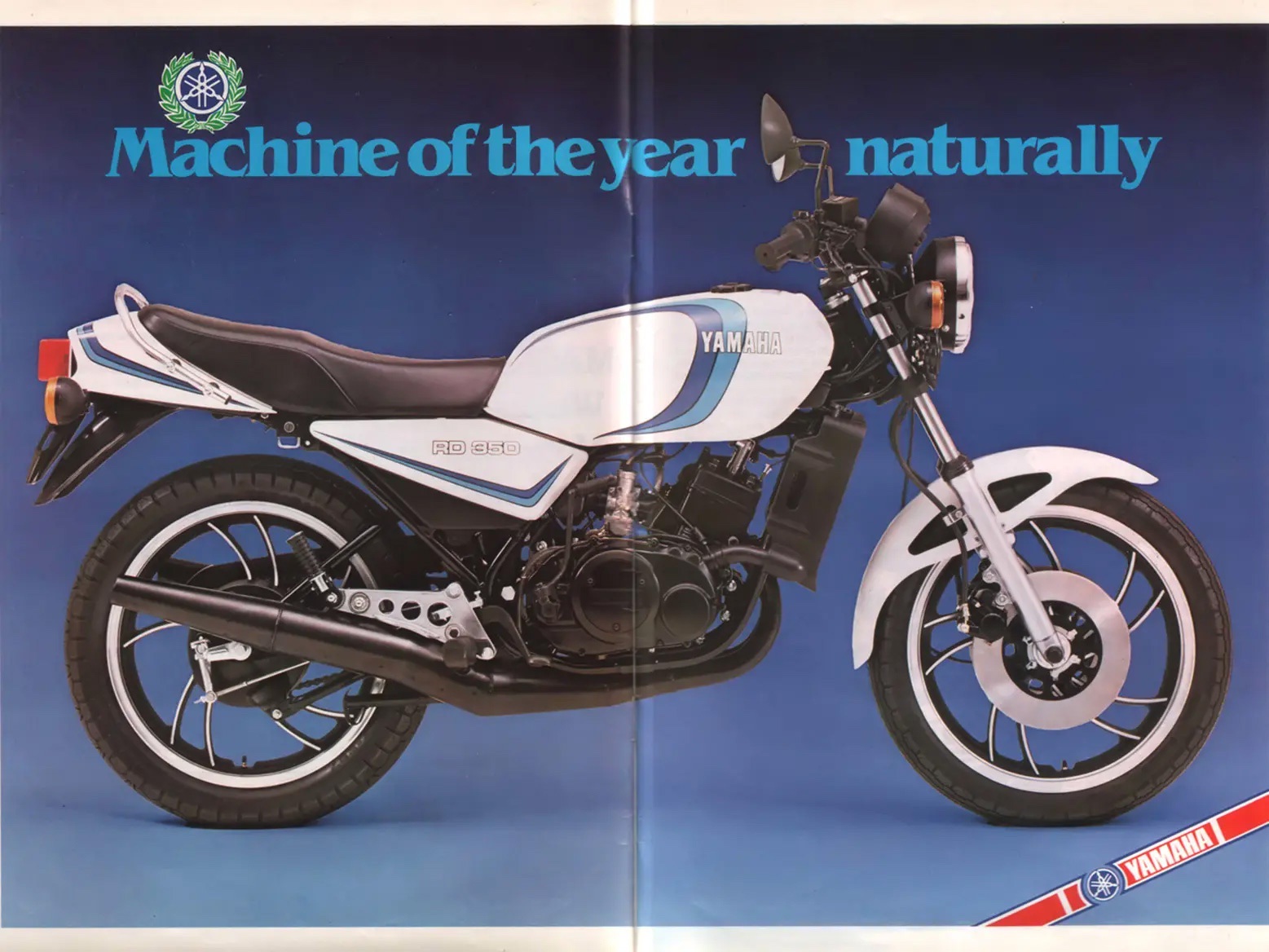 A well-deserved win. Image via MCN.

Now while the specs may seem a little tame by today’s standards, a bike weighing in at 160kg (350 lbs) with 50 hp and a top speed of a tickle over the ton that was also legal for learner motorcyclists to ride was a mind blower back then. C’mon! 110mph on a learner-legal motorcycle!

Who made that decision? I’ll tell you who; bureaucrats who didn’t understand the power of two-stroke engines, that’s who. “It’s only 350ccs. You’d have to try pretty hard to get into trouble with that!” they said. But oh, how wrong they were. And thusly, a metric shit-ton of British kids proceeded to go out and do exactly that. It’s a wonder there’s any of them left in one piece, to be honest. 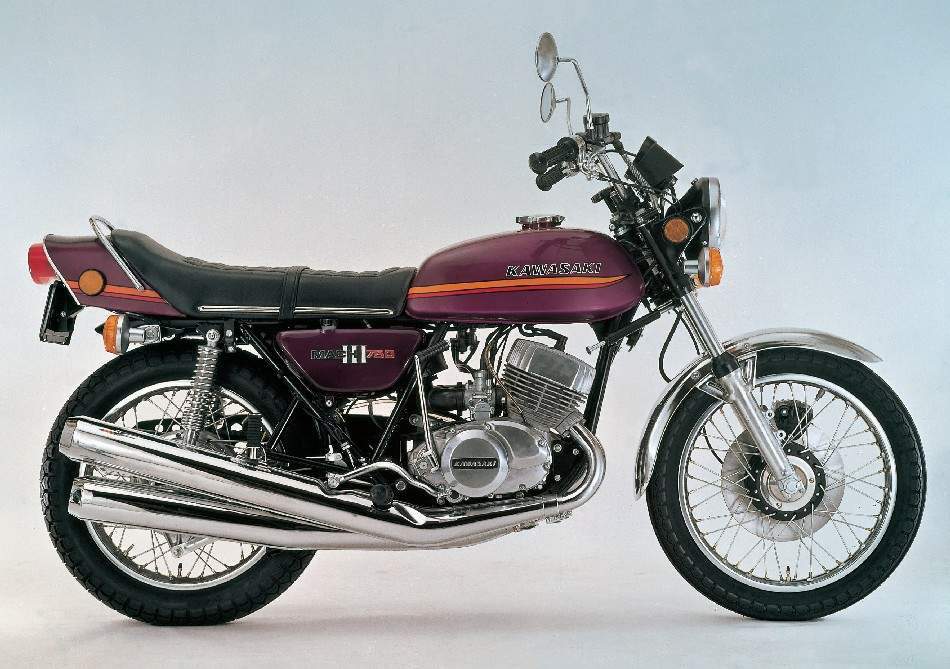 Depending on who you ask, the ’71 Kawasaki H2 Mach IV is either the best or most dangerous motorcycle ever made. Whatever the truth may be, it’s definitely etched its name in the history of two-strokes as a kind of 1970s motorcycling high water mark, in the same way that some of the American muscle cars did around the same time. They too are overpowered, underbraked, easy to break loose—and from all reports, hilariously good fun to boot. 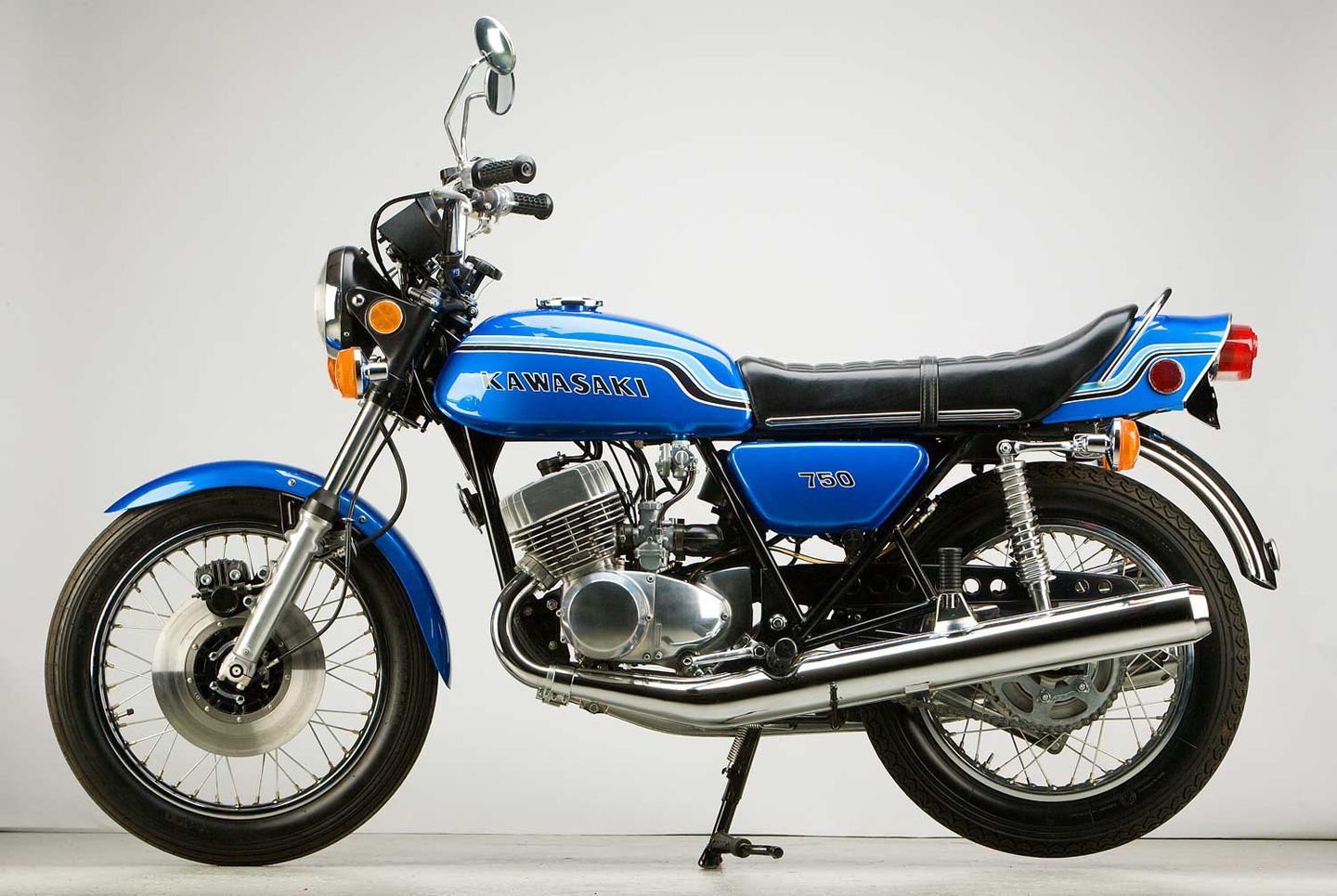 …and the single on the left. Image via Kawasaki.

And just why this might be doesn’t exactly require rocket science to fathom—supersonic speeds have something to do with it. See, if the RD350 can get 50hp out of a twin 350cc two-stroke, then no prizes for guessing that the Kawasaki engineers managed about 75hp for this 200 kg (440 lbs), 748 cc, triple-cylindered beastie. And that’s probably a conservative power estimate.

Torque was also impressive, at around 77 lb-ft. So they are strong on go and weak on woah. Modern upgrades and 50 years of learnings have somewhat tamed these Kobe monsters, but not enough to stop the insanity and accompanying in-helmet giggles. 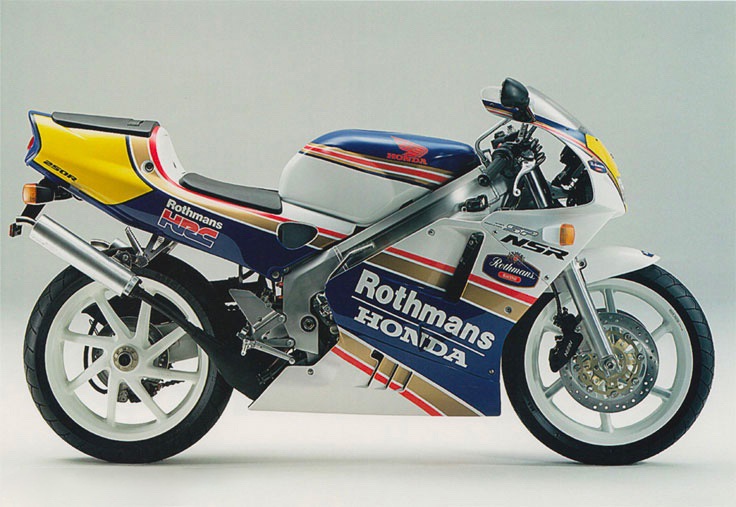 Lines for DAYS. Image via Honda.

If ever a two-stroke bike got the race replica thing right, surely it was the 1994 Honda NSR250. Almost the spitting image of Luca Cadalora’s 1992 world championship bike, the thing did—and still does—look like the absolute business. Jaw dropping features included a keyless ignition via Smart Card theft prevention system dubbed “PGM-IV ignition”, that gorgeous single-sided swing arm and a Big Tobacco paint job that still raises the hairs on your arms, despite all of us knowing better. 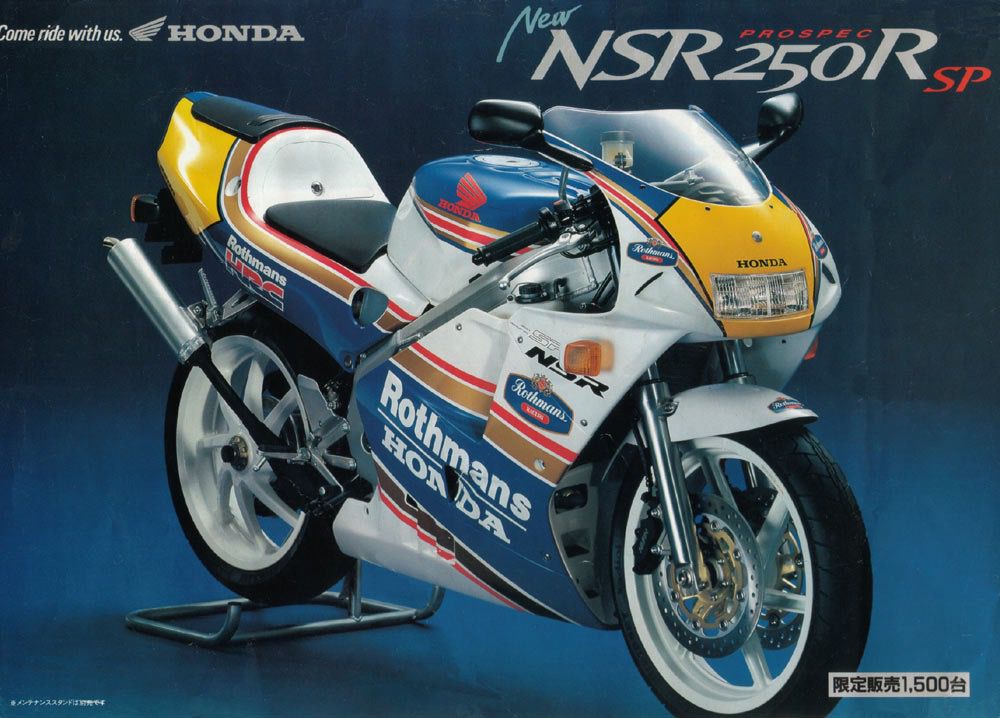 Proof that when it comes to moto graphics, more is more. Image via Honda.

Weighing in at a paltry 150 kgs (330 lbs) and with a conservative 40 hp on tap, those in the know could get their hands on a special HRC Smart Card that would unlock an extra 15hp (aka the “unrestricted” mode). And don’t get me started on the 12,000 rpm redline. Damn! The SP model shown here was the cream of the crop thanks to a dry clutch, adjustable suspension, and Magtek wheels.

Only 1,500 were made, but there’s a wider pool of bikes to choose from if you can forego the SP pack. It’s a well-known fact that Soichiro Honda was not a two-stroke fan, but with bikes like this coming out of the imaginations of the Hamamatsu engineers, you’d have to wonder what they would have been capable of if they’d really leant into the technology.

Yes, I know you want to hear it. Try this. 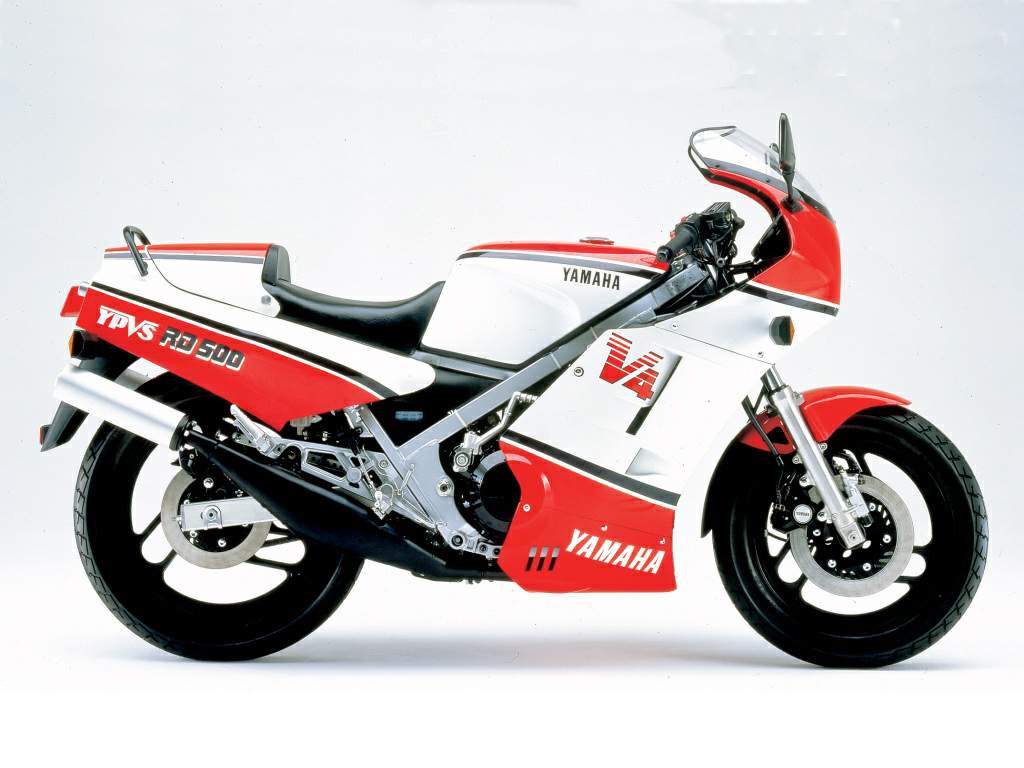 If only it had more acronyms on it… Image via Yamaha.

If the Honda motorcycle above was the race rep smoker to have in the 90s, then I think it’s fair to say that the ’80s equivalent would have to be the Yamaha RD500LC. Also known as the RZ500 in Canada and Australia, the bike was the almost-inevitable conclusion to Yamaha’s successes with Kenny Roberts and their legendary YZR500 Grand Prix bike.

Interview: The Future of Safety ‘ware with Jay Giraud

And don’t forget the RD350LC, too. But this was no learner-legal boy racer bike; this angry red and white rocket was the absolute real deal. And with 88hp and 50 lb-ft of torque available from a damn V4 engine, there’s not much to argue about. 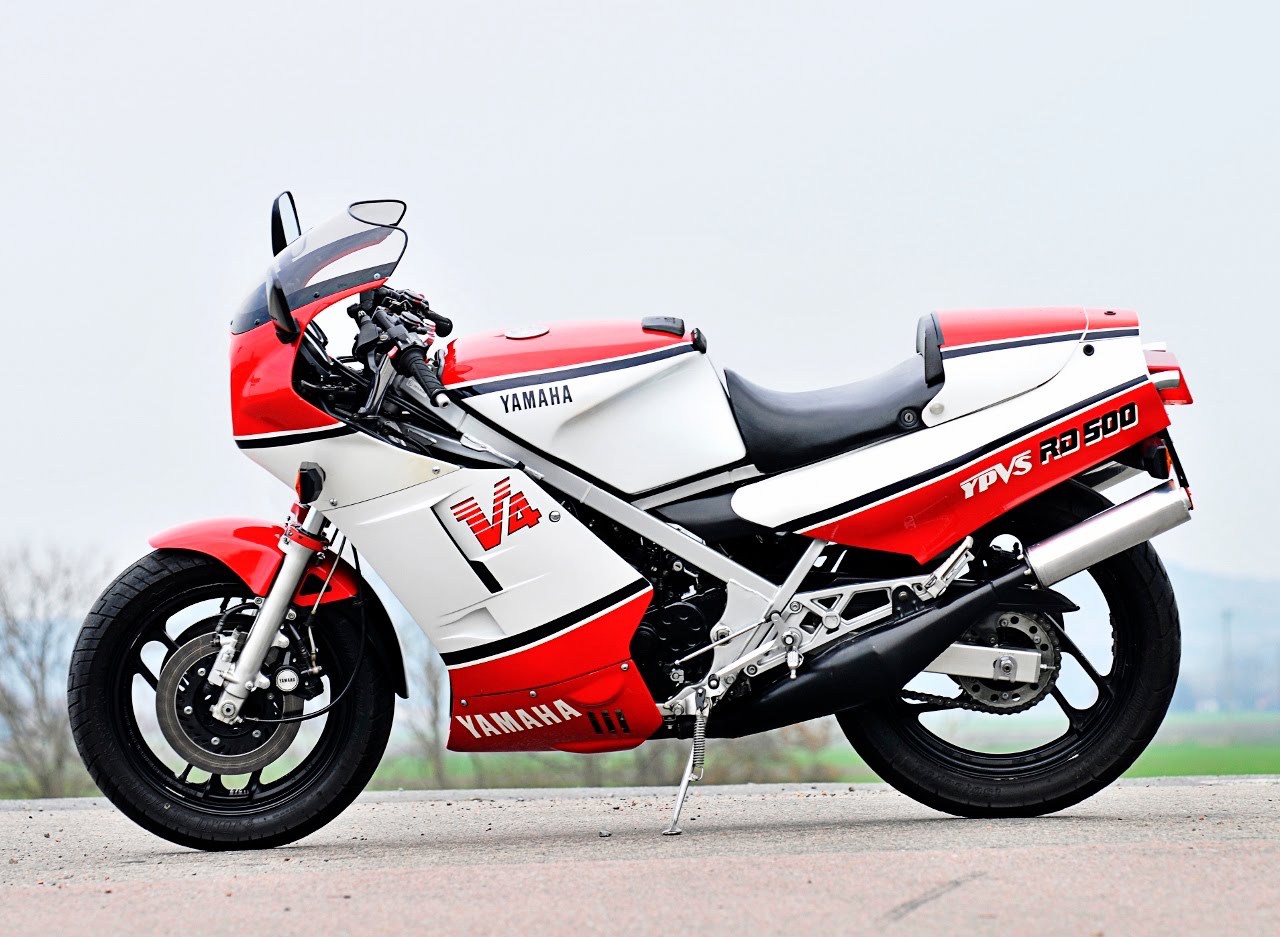 The RD (Race Developed) model uses a 50˚, twin-crankshaft V4 engine layout with YPVS—or Yamaha Power Valve System—technology, which basically increased the engine’s output by varying the “timing” of the bike’s exhaust port in relation to the engine’s speed with a servo motor. The other upside is a broader powerband. And don’t get me started about those incredible quadruple exhausts.

The engine also featured intake reed valves that set it apart from the GP bike, which used rotary disc valve induction. A Japan-only special edition was also released, named the RZV500R. The major difference here was a hand-welded aluminum frame, which reduced the bike’s weight by a substantial 10 kilos (22 lb) over stock. Want. 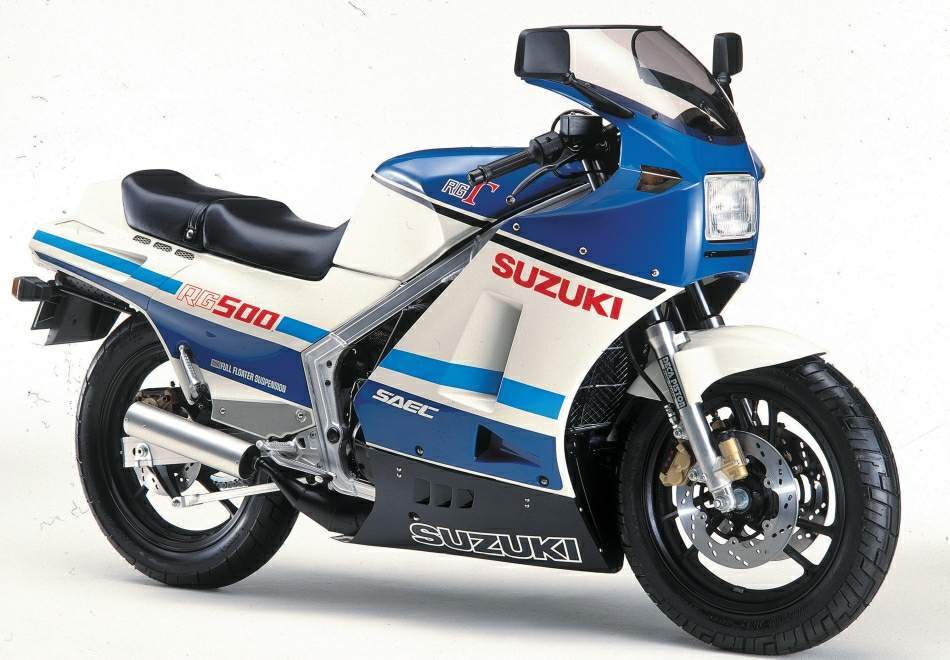 Without the tail section… Image via Suzuki.

I saved the most powerful for last. Any Barry Sheene fans worth their salt will know that his first GP wins were on the RG500 Suzuki “XR14” smokers in the mid ’70s. The design was unique insofar as the four cylinder engine was arranged in a square configuration just like the Ariel Square Four from the 1930s.

And despite the well-known heating issues with that design, Suzuki’s engineers managed to produce something pretty special. Special enough that it went from racing winner to showroom sales success with the release of the road-going RG500 (Also called the “Gamma”) you see here. As is usually the case, this was also the point at which Suzuki racing decided that the square four design had reached its limits, and they shifted to a V4 configuration in 1987. 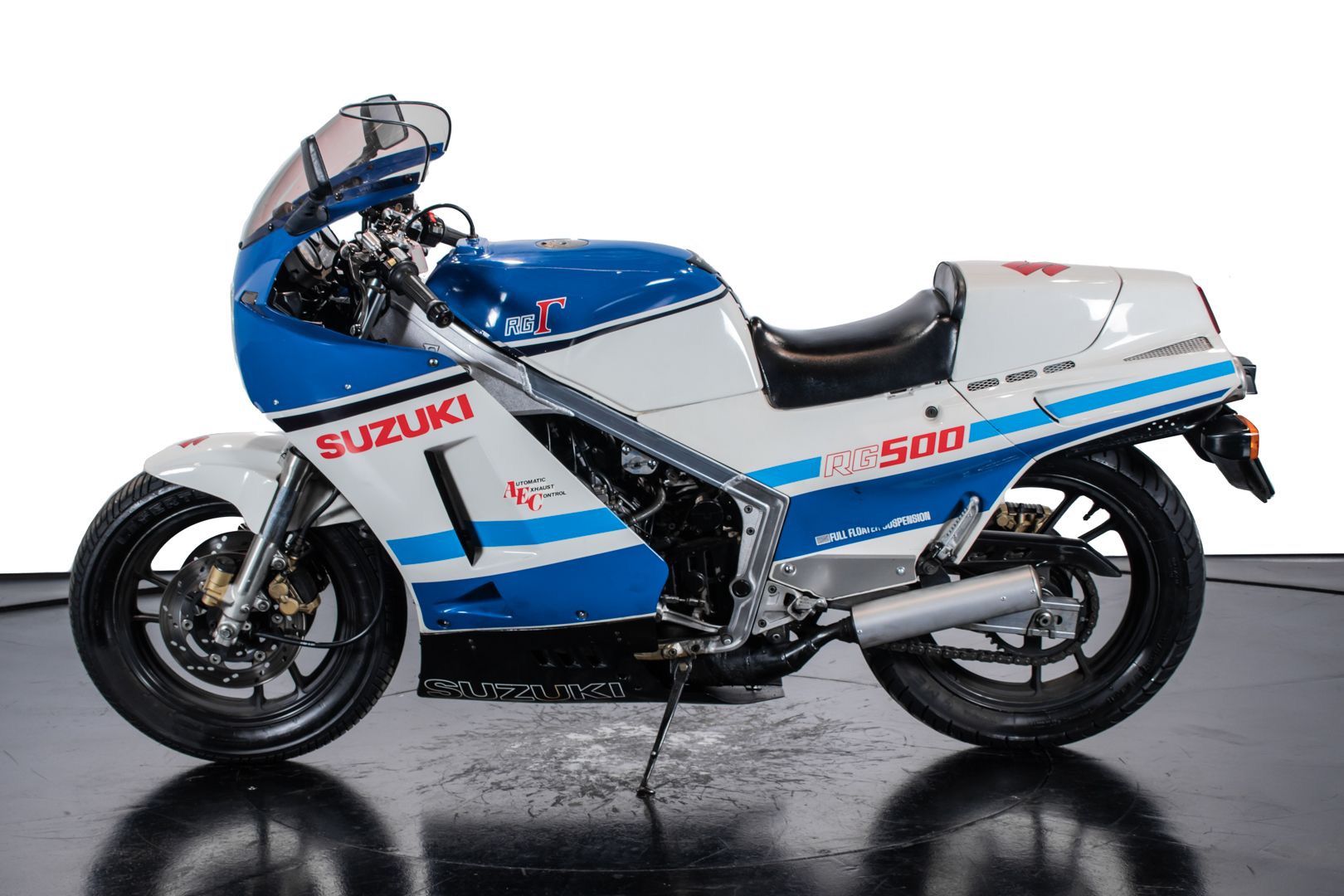 …and with. Better with, yeah? Image via ruotedasogno.com.

As with all ’80s bikes, it’s covered with tech abbreviations. In this case, the one that really matters is the “SAEC” initials on the bike’s right side fairing. Similar to Yamaha’s YPVS system, it’s essentially an exhaust power valve that varies the geometry of the exhaust system in an effort to make more power over a wider range of engine speeds.

The bike also had “AEC” tech which affected the bike’s valves for a similar outcome. And while in my eyes, its looks haven’t quite stood the test of time like the Yamaha and Honda above, there’s little doubt that a well-tuned and maintained bike would make for a great Sunday ride and a great moto investment opportunity in 2022.

Behind the Visor Newsletter

wBW is an A07 Online Property